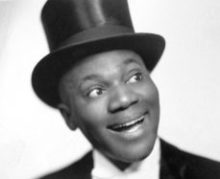 Born Luther Robinson in Richmond, Virginia, 1878, Bill “Bojangles” Robinson is widely recognised as the Grandfather of tap dance as we know it today. His career began at the tender age of 5, busking in front of theatres for coins with a friend. The two were noticed by another local boy, who encouraged them to run away to Washington D.C. with him. Only Bill agreed, and the two stowed away on a freight train for the big city. They worked odd jobs and danced in local beer gardens before heading to New York as soon as they had “money for train fare and new suits”, where Bill found a break in Meyme Remington’s touring troupe. In the show, The South Before the War Robinson performed as a “Pick” or pickaninny – a common term of the era for a ‘cute’ child of colour who would sing, dance and tell jokes.

In 1900 Robinson won a buck-and-wing contest in New York, and the resulting publicity propelled his career forwards. He began performing in Vaudeville acts, and was among the first performers to break vaudeville’s “two-coloureds” rule and perform as a solo act – just one of his many contributions to the civil-rights movement.

When the first world war broke, Robinson offered to perform for troops – both black and white – for no charge, and in 1918 received a commendation from the War Department for his services. It was also in this year that he incorporated his famous stair-dance to his act, which has been imitated globally many times since.

In 1928 he first hit Broadway, with the smash-hit musical Blackbirds, and over the next decade worked both on Broadway stages and in Hollywood movies, most notably in a recurring partnership with Shirley Temple – the first interracial dance partners in history. Robinson modified his famous stair dance into a duet with the 7-year-old Hollywood sweetheart for Fox Film The Little Colonel

in which they held hands – a hugely controversial move for the time, resulting in the scene being cut from the movie in many southern theatres. The two also appeared in The Littlest Rebel

, and Just Around The Corner

In 1943 Robinson made his final film appearance, starring alongside other key figures such as the Nicholas Brothers, Cab Calloway and Fats Waller in “Stormy Weather

” loosely based on Robinson’s own life. In 2001, the movie was selected for preservation in the United States National Film Registry by the Library of Congress as being “culturally, historically, or aesthetically significant”.

According to dance critic Marshall Stearns, “Robinson’s contribution to tap dance is exact and specific. He brought it up on its toes, dancing upright and swinging”, giving tap a “…hitherto-unknown lightness and presence.” Tap icons such as Sammy Davis, Jr., Ann Miller, Bunny Briggs and Gene Kelly have credited him as an inspiration or mentor. In 2001 Gregory Hines produced and starred in a biopic “Bojangles

”, and Hines lobbied the US Government to officially name  May 25th, Robinson’s birthday, National Tap Dance Day in his honour. Robinson is also credited with having introduced a new word, copasetic, into popular culture, meaning “everything is good”.

Both during his lifetime and in the years since, Robinson has been criticized for what some perceived as his participation in racial stereotypes of the era, being labelled an “Uncle Tom” figure. Robinson resented such criticism, and undoubtedly contributed to the civil-rights movement in many ways. In addition to the achievements noted above, Robinson was one of the first minstrel and vaudeville performers to appear without the use of blackface makeup, and the first African American to headline a mixed-race Broadway production, which broke conventions and inevitably opened up doors for the performers who followed him. Outside of the entertainment field, he used his stature to influence authority figures and make progressions for the movement, such as persuading the Dallas police department to hire their first African-American policeman, lobbying President Franklin D. Roosevelt for more equitable treatment of African-American soldiers during WWII, and staging the first ever integrated public event in Miami.

Despite being the most highly paid African-American entertainer in the first half of the twentieth century, Robinson died penniless, having given much of his fortune to charity. As a prelude to his biography

, his goddaughter Rosetta LeNoir writes of him: