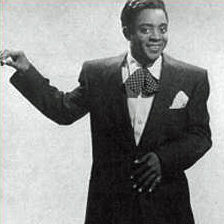 Bernard “Bunny” Briggs was born in 1922 in the heart of Harlem, NYC: “a swingin’ area, I’ll tell you that.” According to Briggs, he was born dancing. In his interview with Rusty Frank for the book Tap! The Greatest Tap Dance Stars and Their Stories, 1900-1955

he says: “When I finally faced the world my legs were kickin’. They let me loose, and I just started dancin’. Just started right out dancin’. And been dancing ever since.”

From a young age he would go to see his Aunt Gladys perform as a chorus girl at the Lincoln Centre, and was captivated. After seeing Bill Bojangles Robinson on the bill there “dressed like a gentleman”, he was inspired, and describes it as the point he knew he wanted to be a tap dancer. He started going down to the local record shop to dance for change, and at just five years old was spotted by a local entrepreneur, who asked his mother’s permission to take him to perform at local venues. Eventually, this act became Porkchops, Navy, Rice and Beans. They toured ballrooms and casinos for the next five to six years, until one gig in the early 1930s which changed everything for Bunny. The act played with Lucky Roberts and his Society Orchestra who only played for the Four Hundreds – the wealthiest people in America. Luckey was so taken with Briggs he asked to take him on as part of the act. Briggs played for the Wanamakers, the Astors, and the Vanderbilts, charming his way into their hearts of New York’s elite.

In the early forties, he began touring with the big swing bands of the era and developed his style to be-bop. Modern Tap Master Brenda Bufalino once wrote of Briggs, “There was never any problem keeping Bunny on stage. He kept dancing his riff-walks and quick turns, flipping his head, and whipping his hair. He stopped short to give the audience a chance to applaud in the middle of his solo, and finally, when he brought the whole house to its feet, he would walk over to the microphone and tell them how much he loved them.”

In 1960 Briggs appeared at the Monterey Jazz Festival in 1960 with the Duke Ellington band, and Bunny became known as “Duke’s dancer”. Briggs also performed in the 1962 Newport Jazz Festival, a landmark concert which is frequently cited as the height of tap dance’s popularity. In 1965, again with Ellington, Brigg’s performed at the Sacred Concert of Music, where Ellington introduced him as “the most superleviathonic, rhythmaturgically-syncopated tapsthamaticianisamist.” Along with other great hoofers of the day – now regarded as masters themselves: Baby Laurence, Honi Coles, Pete Nugent, and Cholly Atkins, jazz critic Whitney Balliett described Briggs in that concert as an “airborne dancer whose steps and motions are an exquisite balance of comic exaggeration and almost fussy precision. In the paddle-and-roll, he began with a long sequence of abrupt, irregular heel beats, punctuated by silences and quick, stiff head-and-arm motions, broke into a barrage of military-type flam strokes, and settled into soft, dizzying heel-and-toe beats (his torso and head now motionless) that carried him smoothly all over the seemingly ice-coated stage.”

In the 1970s Briggs appeared on the Johnny Carson TV show, as well as specials Apollo Uptown and Monk’s Time. During the 1970s and 1980s he worked as a guest entertainer aboard cruise ships; and toured Europe in the 1980s with The Hoofers (which included Jimmy Slyde, Lon Chaney, Sandman Sims, Chuck Green). In 1989 he was one of the featured dancers in PBS Tap Dance in America, hosted by Gregory Hines; and was also one of three hoofers (Briggs, Howard “Sandman” Sims and Chuck Green) whose lives are documented in the 1979 film No Maps on My Taps.

He worked with Hines again in 1989, as well as Sammy Davis, Jr. and a young Savion Glover in the film Tap

, and in the same year Briggs performed in the Broadway production of Black and Blue, for which he received a Tony nomination.

In 2002, Bunny received an honorary doctorate of Performing Arts in American Dance by the Oklahoma City University, and in 2006 was inducted into the Tap Dancers Hall of Fame. He passed away in 2006 in Nevada, aged 92.