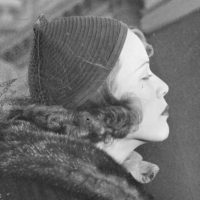 Eleanor Torrey Powell was born in Massachusetts, 1912. She took up dance lessons at a young age, as her mother thought it may encourage her to overcome her social awkwardness, but she didn’t learn to tap until after her stage career had already begun. Powell performed in two children’s shows before her first appearance on Broadway aged just 17, in a show called The Optimists. The show’s short run lead the young Powell to seek further engagements on Broadway, but she found herself frequently turned down due to her lack of tap dance skills, and so enrolled in class under the tutelage of Jack Donohue. Just a few months and 10 lessons later, in January 1929 Powell became a star on Broadway in Follow Thru, tapping to the acclaimed “Button Up Your Overcoat.” She also performed at Carnegie Hall with Paul Whiteman’s Orchestra, and in the 1932 Florenz Ziegfeld production of Hot-Cha!

. The experience, however, left her disillusioned with Hollywood, and when she was approached by MGM she initially refused their offers of a contract. Reportedly, Powell attempted to dissuade the studio by making what she felt were unreasonable salary demands, but MGM agreed to pay the figure and she subsequently relented.

She played her first starring role in 1935 At Home Abroad, followed closely by Broadway Melody Of 1936

(1935). Other notable titles of her career include Born To Dance

(1940), in which Fred Astaire danced with Powell to Cole Porter’s “Begin the Beguine” – considered perhaps one of the most iconic tap sequences in film history.

In Lady Be Good

(1941), she danced to “Fascinating Rhythm”, which famously ends with her being flipped head over heel by the male ensemble. Over the next eight years she filmed a further four movies: Ship Ahoy

Powell constantly wowed audiences with her boundless enthusiasm and energy, not to mention her virtuoso dance numbers. According to the equally brilliant Ann Miller, Powell inspired her own dancing career, which would lead her to become an MGM musical star in the years following. Miller said: “I was such a great admirer of hers…Eleanor was a wonderful lady”.

After a break from her screen career, Powell made a return to the stage in 1959, including a stint in Las Vegas as well as touring, which continued well into the 60s.

Her style made her stand out from other female dancers of the era, hitting the floor harder and staying low to the ground. In the highly patriarchal era of her career, Hollywood sometimes found her difficult to cast, as she outshone many male leads, and wasn’t always considered “feminine”. Indeed, Fred Astaire himself admitted he found her somewhat intimidating: “Eleanor Powell, one of our greatest talents, is a bit too powerful for me.” Fayard Nicholas (of The Nicholas Brothers) made no such distinctions: “Eleanor Powell was one of the very greatest, period, bar none. Not one of the greatest woman — one of the greatest, period. She was a musician.” Perhaps his experiences as a black performer through the ages of segregation lead him to sympathise with the “other”ness women so frequently encountered, and to some extent still do to this day.

In 1981, she received an award in her name and her honour, the Ellie Award, from the National Film Ceremony, for her outstanding contribution to the film musical. She was posthumously awarded a star on the Hollywood Walk of Fame, and was inaugurated into the International Tap Dance Hall of fame in 2002.
She passed away in 1982 aged 69, but the memory of her vivacious and athletic screen performances remain. She once said of herself:

“Once I was identified as a tap dancer that was it – because nobody had ever seen that kind of thing before. When I hit it, the off-beat was just coming in. This was the big new thing, and I used to practice all the time between shows.”