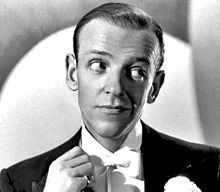 Frederick Austerlitz was born in 1899 in Omaha, Nebraska, and moved to New York in 1905 with his family to receive dance training and perform on vaudeville stages.

He and his sister Adele studied with Alviene Master School of the Theatre and Academy of Cultural Arts, but could not perform in New York due to child labour laws.They toured the famous Orpheum Circuit, but it wasn’t until a few years later that they began to incorporate tap dancing into the act, with Fred taking inspiration from Bill “Bojangles” Robinson and John “Bubbles” Sublett. The pair learned the tango, waltz, and other ballroom dances, and returned to New York in 1916 to perform in Over the Top on Broadway. They worked together on both Broadway and the West End in numerous musicals for over a decade, in productions such as The Passing Show of 1918, For Goodness Sake (1922), the Gershwins’ Lady, Be Good (1925) Funny Face (1927), Smiles (1930), The Band Wagon (1931) and many others. Adele retired following the close of The Band Wagon and married into British aristocracy, effectively ending their working partnership.

. The same year he filmed Flying Down to Rio

for RKO with Ginger Rogers, beginning their historical partnership. Astaire and Rogers made a further nine films together at RKO: The Gay Divorcee

(1939) and finally The Barkleys of Broadway

(1949). A number of the Astaire-Rogers musicals sat in the highest-grossing movies for RKO, and Astaire’s savvy agent Myron Selznick negotiated for Fred a percentage of the films’ profits rather than a one-off payment (or “buy-out” fee), which was extremely rare in actors’ contracts at that time.

Astaire had a great deal of directorial input over the dance scenes in his movies. He famously insisted that routines were filmed in as few shots as possible, and that performers were always entirely in frame with no close-ups of either face or feet.

Typically, an Astaire picture would include a solo performance which he termed his “sock solo,” which frequently included props. Astaire performed with traditional props, such as a top hat or cane, but was known for his imaginative use of objects including a golf club in Carefree, a hat stand and gymnasium in Royal Wedding

, and the scenes with drum kits in both Easter Parade

and A Damsel in Distress

. He also made full use of his set and surroundings, notably his famous “ceiling dance”, also from Royal Wedding.

His pictures would also include duets of various natures. For romantic scenes he would use his ballroom technique, perhaps the most notable example of this would be “Cheek to Cheek” in Top Hat, in which Rogers performs in the iconic white feather dress.

Astaire used tap dance for upbeat numbers, sometimes celebratory (like “Begin the Beguine” with Eleanor Powell), sometimes comedic (“The Babbit and the Bromide” with Gene Kelly), and sometimes to portray competition or a challenge (the “Rehearsal Duet” with Rita Hayworth in You’ll Never Get Rich

). While he did perform tap duets with Rogers, she was not an experienced tap dancer, and her taps were often dubbed by choreographer, Hermes Pan. Astair once said of her: “She couldn’t tap and she couldn’t do this and that … but Ginger had style and talent and improved as she went along”.

After finishing his RKO contract to go freelance, his first partner, Eleanor Powell in Broadway Melody Of 1940

was considered by many one of the greatest tap-dancers of the generation. In his autobiography Steps in Time

, Astaire remarked, “She really knocked out a tap dance in a class by herself.”

He made two pictures with Rita Hayworth, You’ll Never Get Rich (1941), which catapulted Hayworth to stardom, followed closely by the equally successful You Were Never Lovelier

in 1946 featured Astaire, Gene Kelly, Cyd Charisse, Lena Horne, Judy Garland and Fanny Brice. Later in ‘46 Astaire announced his retirement, but was convinced to return to the screen by Gene Kelly, who had to pull out of filming Easter Parade due to injury, in which Astaire starred again opposite Judy Garland, as well as the formidable tap dancer Ann Miller. Some more notable films from Astaire’s lengthy career include Royal Wedding (1951) Funny Face

(1957) in which he appeared opposite Audrey Hepburn, and his last major musical film Finian’s Rainbow

Fred’s performance career spanned a total of 76 years, during which he starred in more than 10 Broadway and London musicals, 31 movie-musicals, 4 television specials, and numerous records. As a dancer, he is best remembered for his grace and style, his sense of rhythm, and his attention to detail, as well as his massive contribution to American culture in terms of film and theatre. His friend and long-time collaborator, Hermes Pan said of him: “Astaire was a one-hundred-percent perfectionist.”

Amongst his many awards and accolades, including two Grammys, two Emmys, and an honorary Academy Award “for his unique artistry and his contributions to the technique of musical pictures”, Astaire was named by the American Film Institute as the fifth greatest male star of Classic Hollywood cinema in 100 Years… 100 Stars. Astaire has been inducted into the Halls of fame for Tap dance, Ballroom dance, Television, National Museum of Dance, Grammy Hall of Fame, and the International Best Dressed list. In 1978 Astaire was the first recipient of the Kennedy Center Honors, and in the same year received the National Artist Award from the American National Theatre Association for “contributing immeasurably to the American Theatre” In 1981 he was honoured with The Lifetime Achievement Award from the American Film Institute. Gene Kelly credited Astaire as being the father of the American Movie-Musical, saying: “the history of dance on film begins with Astaire.”