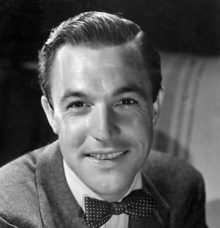 Born Eugene Curran Kelly in Pittsburgh, 1912, Kelly is known today as a legend of the Hollywood “Golden Era”.  A talented dancer, actor, singer, director, producer, and choreographer, he is famous for his graceful dance style, charming personality and good looks.

Growing up in Pittsburgh, Gene watched a performance by the man he considered “the epitome and the quintessence of tap dancing perfection” – Bill “Bojangles” Robinson – at a local theatre and was mesmerised: “Robinson was a great star,” recalled Gene, “Nobody could get the ease and the grace and the sound that Bill Robinson got. I’ve never heard it quite that clean and clear again…I was very fortunate to be a young man coming along learning dancing when he was around.”

Kelly opted to study journalism at Pennsylvania State College, but the 1929 Wall Street crash forced him to work to help his family. He created dance routines with his younger brother, Fred, to earn money in local talent contests and nightclubs.

In 1931 Kelly enrolled at the University of Pittsburgh to study economics, while his family opened a dance studio in Pittsburgh where he taught in his spare time, as well as being involved with a theatre group at the University. In 1932 his family renamed their studio The Gene Kelly Studio of Dance and opened a second location in  Pennsylvania in 1933 – the same year Kelly graduated. He was accepted into University of Pittsburgh Law School, but quit to pursue a career as a dance teacher and full-time entertainer after two months. In 1937 he moved to New York in search of work as a choreographer, but after little success returned to Pittsburgh choreograph the musical revue Hold Your Hats in April, 1938. Robert Alton was staging this performance, and invited Kelly to return to New York in November 1938, was as a dancer in Cole Porter‘s Leave It to Me! In 1940 he got the lead role in Rodgers and Hart‘s Pal Joey, again choreographed by Robert Alton, which was a huge success, and the catalyst for his Hollywood career.

After Kelly’s contract in Pal Joey ended in October 1941, he headed to Hollywood for his first MGM motion picture: For Me and My Gal

, in which he starred opposite Rita Hayworth. Columbia gave Kelly almost complete control over the making of this film, and many of his ideas contributed to its lasting success. He removed several of the soundstage walls so that they could dance along an entire street in one take, used superimposition so that he could dance with his own reflection in the sequence “Alter-Ego Dance”, giving his “double” a ghost-like quality. Kelly, along with Stanley Donen, devised his own choreography – something which MGM hadn’t allowed him to do. Film historians consider Cover Girl the point where Kelly hit his stride in a musical role that foreshadowed the best of his future work.

On the back of this success, in Kelly’s next film, Anchors Aweigh

(1945), MGM gave him free reign to devise a range of dance routines, including his duets with co-star Frank Sinatra and the famous animated dance with Jerry Mouse. Anchors Aweigh became one of the most successful films of 1945, and it garnered Kelly his first and only Academy Award nomination for Best Actor. In Ziegfeld Follies

(1946) Kelly collaborated with one of his greatest peers Fred Astaire in  “The Babbitt and the Bromide“.

, with songs by Cole Porter. It is also notable for Kelly’s work with The Nicholas Brothers – the leading black dancers of their day – in a virtuoso dance routine “Be A Clown”. To have Gene dancing with two black men was seen as a huge risk by the studio executives, as racial segregation was still practised widely in America at this time; but Gene insisted that it be included and the scene is now recognised as historically significant.

An American In Paris

was released in 1951 and won six Academy Awards, including Best Picture. The dream ballet sequence lasted an unprecedented seventeen minutes and was the most expensive production number ever filmed at that time.  In recognition of his contribution to the arts, the Academy also presented Kelly with an honorary Academy Award “in appreciation of his versatility as an actor, singer, director and dancer; and specifically for his brilliant achievements in the art of choreography on film” the same year.

Riding high on this success, Singin’ in the Rain

was released shortly after in 1952. As co-director, choreographer, and leading man, Kelly was the central driving force behind what has arguably become one of the most widely recognised, imitated and revered movie musicals of all time. Singin’ in the Rain was one of the first 25 films selected by the Library of Congress for its National Film Registry, and featured several notable dances including  Kelly’s celebrated solo routine to the title song; the “Broadway Melody” finale with Cyd Charisse; and the “Moses Supposes” routine with Donald O’Connor. Harking back to his earliest inspiration, Kelly once noted that “there are variations of Bill Robinson in the dance I do with Donald O’Connor in Singin’ in the Rain—’Moses Supposes.’ Variations of it, but, basically, some of those steps are from Bill Robinson.”

Kelly had the opportunity to work with  Cyd Charisse again shortly after, on Brigadoon

(1954). Subsequently, his relationship with MGM was strained by their refusal to lend him out for Guys and Dolls

, and so he negotiated an exit to his contract, although had to remain for three further movies. It’s Always Fair Weather

(1956) includes his famous roller skate dance routine to “I Like Myself”, and is the first example of Kelly’s experimentation with Cinemascope, one of his many innovations which contributed to the transformation of Hollywood Motion Pictures in this era.

Following his creation of the ballet Pas de Dieux for the Paris Opera in 1960, Kelly was made Chevalier of the Legion of Honor, and later received lifetime achievement awards in the Kennedy Center Honors (1982), and from the Screen Actors Guild and American Film Institute. In 1995, he was awarded the National Medal of Arts by President Clinton. In 1999 the American Film Institute also numbered him 15th in their Greatest Male Stars of Classic Hollywood cinema list.

In 2015 Kelly was inducted into the tap dancers hall of fame, alongside some of his great inspirations, friends and peers: Bill Robinson, the Nicholas Brothers, Fred Astaire and Gregory Hines among others. According to Kelly’s wife and biographer, Patricia Ward Kelly, “Gene loved Gregory and spoke with warmth about him as a dancer and human being, and about the ‘terrific clarity and terrific precision’ of his steps. The feeling was clearly mutual as evidenced in the tribute to Gene at the 1982 Kennedy Center Honors when Hines performed ‘I Got Rhythm’ and ‘Fascinatin’ Rhythm’ in an homage to his friend and mentor.”

Kelly passed away in 1996 after a decline following a stroke.