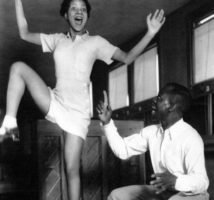 Jennie May Ligon was born in Chicago, 1916, and became one of the first African American women in tap dance to develop a career as a soloist. Like many performers of her generation, her musical talents were developed by watching touring acts who performed at the local theatres, and practising by herself or “playing theatre” with friends on the streets of Harlem.

When LeGon was about thirteen, her elder brother – a singer and exhibition ballroom dancer – landed a job in a Christmas show at a local cinema. He came home and told her that they were looking for girls for the chorus line, so she went down to audition and was offered the gig. However, there wasn’t a costume that fit the young, slender LeGon, so thinking fast on her feet she told the concerned director: “I don’t dance in dresses in things like this, I dance…in pants”. The director responded by making her the soubrette – the dancer in the front of the line – and she had to rally her family round to make her a suit costume, which became her signature style.

Aged fourteen, LeGon landed a gig in the chorus line for the Count Basie Orchestra, and soon after auditioned for the famous Whitman Sisters – then the highest paid act on the TOBA circuit, and completely managed and run by the four Whitman women. Arriving early for her audition, LeGon saw The Four Step Brothers rehearsing, and asked if she could watch them. They were playing with some new material when the confident LeGon offered a suggestion, to which they responded: “Wow, girl, you can sure lay it down!” When it came time for her audition the brothers accompanied her down the hall and told the director to put her straight on the payroll, and so her engagement with the Whitman Sisters began.

LeGon tributes her big break to a show at the Wilshire Ebell Theatre in Los Angeles, where she was stopping the show with her flash. LeGon, spotted by a casting director for RKO, was offered a part in the 1935 movie musical, Hooray for Love

, as opposite Bill “Bojangles” Robinson, who she described as a patient teacher and a perfectionist. It was while working on that movie that she met Fats Waller, with whom she formed a very close friendship, and continued to work with for many years afterwards. LeGon, Waller, and Robinson perform the number she is possibly best remembered for: “Livin’ in a great big way”.

LeGon discusses racial segregation, but it seems that, in some ways, the patriarchy was an equal challenge to overcome. She said of the Hooray for Love preview:

“At that time, we lived in this black-and-white world, definitely. But here were all these people of the opposite race hugging and kissing me… It was just glorious that all those people would stop me and talk to me that way. It was just heavenly.”

But when discussing the Hoofers Club, she states:

“I was one of the only girls that was ever invited to come in and dance… There were many women that could ‘do it’… But all in all, there just weren’t too many girl tap acts around… there were excellent girl tap dancers all over the place. I just don’t know why there weren’t many soloists.”

Soon after shooting Hooray for Love, Ms. LeGon won a long-term Hollywood contract at MGM – the first black woman to do so. She was cast in a supporting role in Broadway Melody Of 1936, which starred white dancer Eleanor Powell, but was cut from the movie, and subsequently the contract was cancelled.  “It was a colour thing,” she told press in 2006. “They said they couldn’t use two tap dancers, but that was bull corn.”

Legon remained a screen performer in diminished roles for several more years, often playing the then racially stereotypical part of the household maid, which quickly grew tiresome: “I think I played every kind of black maid you can imagine,” she told the Vancouver Sun. “I’ve been a maid from the West Indies, Africa, Arabia. It was frustrating, but what was I going to do? You gotta eat, darling — you gotta eat.”

She did, however, land some leading roles in films aimed at black audiences, such as Double Deal

and Birth of the Blues

with the Nicholas Brothers and I Walked with a Zombie

LeGon toured and performed on stage in a number of musicals and dance companies, as well as with Fats Waller. She appeared on television, notably in six episodes of Amos and Andy, but is most fondly remembered by the many students she taught at her school in Vancouver, and is widely recognised for the passion with which she passed on her skills.

Jeni was outstanding for her acrobatic flash style, inclusive of splits, flips and toe-stands, dancing more like her male peers than the female Hollywood stars of the day. A true hoofer, Jeni was not only rhythmical, but expressive.

She was inducted into the Tap Dancer’s Hall of fame in 2002 (inaugural class) and was awarded the Flo-Bert lifetime achievement award in 2001.  The Black Filmmakers Hall of Fame and the National Congress of Black Women have both honoured LeGon, and in 2002, Oklahoma City University conferred upon her a doctorate of performing arts in American Dance. In 1999, the National Film Board of Canada released Grant Greshuk’s prize-winning documentary, Jeni LeGon: Living in a Great Big Way.

“They’re going to have to make a funny kind of coffin, because when I leave I’ll be doing the Time Step!”

This site uses Akismet to reduce spam. Learn how your comment data is processed.