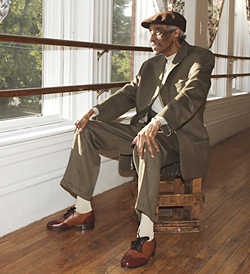 Born James Titus Godbolt in Atlanta, 1927, Jimmy Slyde began his musical training as a young child at a Conservatoire in Boston, where the family had relocated. While he loved music, he found the training dull, and – looking for an outlet for his energy – he was enrolled into Stanley Brown’s studio in Bolton at the age of 12.

There was a plethora of touring venues, burlesque houses and theatres in Bolton, and great performers of the day such as Bill Robinson and Honi Coles would rehearse at Brown’s during the day. Jimmy first learned to slide from one of his instructors there, Eddie “Schoolboy” Ford, but he didn’t adopt the name until he met Jimmy Mitchell, who went by the name “Sir Slyde”. The two developed an act together, and under the name  The Slyde Brothers began performing on the club and burlesque circuit in New England. As their reputation grew, they received invitations to perform with the big band stars of the day: Count Basie, Duke Ellington, and Louis Armstrong among them. Jimmy recalled:  “When I was dancing with the bands, people loved it.”

In the late 50s and early 60s, as jazz began to decline and rock’n’roll came to the fore, Europe seemed as though it may be the only remaining haven for jazz artists and enthusiasts. It was at the 1966 Berlin Jazz Festival that Harlem’s All-Star Dancers appeared on the bill, an act comprising of Jimmy Slyde, Baby Laurence, James Buster Brown, and Chuck Green.

In the seventies Slyde moved to France and settled in Paris, where – along with Sarah Petronio – he helped to introduce rhythm tap. Here he remained for the best part of a decade, performing with Cab Calloway’s band in Paris (1977) and in the Paris production of Black and Blue (1985) with “Lady Di” Dianne Walker, among other notable colleagues. He returned to the states directly after this engagement, where he became a much-in-demand guest artist on the national and international tap festival circuit, as well as touring with Fascinating Rhythms. Slyde also hosted weekly jam sessions at LaCave in New York, where he became a mentor to modern masters such as Roxane Semadeni– who he nicknamed “Butterfly”– and Savion Glover, who called his teacher “the Godfather of tap”. In between Black and Blue in Paris and the show’s Broadway run of 1989, Slyde appeared as a  featured dancer in several films: The Cotton Club (1984), Motown Returns to the Apollo (1985), ‘Round Midnight (1986), and Tap (1989), starring Gregory Hines.

Slyde described his own style for Rusty Frank: “That’s how I dance – by sound. I think it’s probably the bebop influence. ‘Cause I like bebop jazz… I’m a musical dancer.”

Jimmy Slyde earned many awards including the Choreographer’s Fellowship from the National Endowment for the Arts in 1984, 85, 86, 88, and 1993, and in 1999 was awarded a National Heritage Fellowship by the same body. In 1998 he performed for President Clinton at the White House. His many other accolades include the Charles “Honi” Coles Award (2001); the Hoofer Award of the American Tap Dance Federation (2002); an honorary doctorate of Performing Arts in American Dance from Oklahoma City University (2002); the John Simon Guggenheim Memorial Foundation fellowship (2003); and a Dance Magazine Award in 2005. Dr. Jimmy Slyde was inducted into the Tap Dance Hall of Fame in 2008, the same year as his passing.