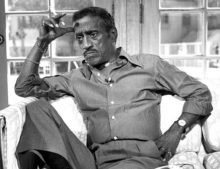 Samuel George Davis Junior was born in Harlem in 1925. His mother – herself a tap dancer on Vaudeville, and her father – also an entertainer on the circuit – separated, and as a result Sammy went on tour with his father aged just three.

As a child, Davis was enthralled by the dancers he saw while on the road, including the legend himself – Bill “Bojangles” Robinson. Davis was slight, sweet, and fast on his feet, and his father and “Uncle” Will Mastin soon taught him to dance, eventually becoming part of their act, the Will Mastin Trio, and wowed audiences up and down the country. Sammy Davis Sr. and Mastin were careful to protect young Sammy from the racial prejudices of the era, something which he didn’t realise until he joined the military. In his autobiography

, Davis describes himself and his father being “gripped by patriotism” in the wake of the Pearl Harbour bombings: they both tried to enlist immediately, but were denied – Jr. for being too young at 16, and his father for being too old, but the younger received his conscription whilst in Reno with the act.

His time in the forces was a wake-up call for Davis, who suffered from racial discrimination of every kind, from casual slurs to outright brutal beatings. He said: “Overnight the world looked different. It wasn’t one colour anymore.” He was taken under the wing of a Sergeant Williams, who encouraged him to read and took time to discuss literature with Davis, providing him with an education he had not received as a child on the road. Williams encouraged him to perform shows at the service club, where he met George M. Cohen Jnr. The two put together an act, and the Army assigned them to an integrated entertainment Special Services unit, where they performed for fellow servicemen. Davis felt if he could make them laugh, then it broke some of the barriers down and bought him “a little chunk of peace”.

After his discharge, Davis rejoined the Mastin Trio, first playing for Japanese-American Soldiers posted in Hawaii. Upon their return work went quiet for a while, and Davis found himself in LA where the now-famous Frank Sinatra was recording for NBC in Hollywood every week. Davis went down to watch the show, and at the stage door Sinatra recognised him from the touring circuit. He invited Davis back to watch the show the following week, leaving a ticket at the door, and subsequently invited Davis to watch rehearsals. The two struck up a friendship, but soon the Will Mastin Trio was back on the road. It was at this time they landed an opportunity to open for Mickey Rooney, one of Davis’ favourite performers, and Davis lapped up the opportunity to learn from one of Hollywood’s showbiz greats. Rooney much admired Davis’ talent in return, asking him to join in his act, telling him to “sneak” in impressions by performing them over his dance steps after Rooney received pushback from the producers, and demanding that some of his own pictures be removed from the front of the theatre and replaced with “The Will Mastin Trio, starring Sammy Davis Jr.”. Davis said: “He was taking space away from himself to make room for me”. Rooney fought for Davis to appear with him in the 1947 movie “Killer McCoy

Back on the touring circuit and making very little money, Mastin received an unexpected telegram: “OPEN CAPITOL THEATRE NEW YORK NEXT MONTH, FRANK SINATRA SHOW. THREE WEEKS, $1,250 PER. DETAILS FOLLOW.” Sinatra had insisted on them as his opener, saying “I don’t want the Nicholas Brothers. I want Sam and his family. Twelve hundred fifty. That’s it.” Sammy later said of Sinatra in a television interview: “He cared, long before it was fashionable to care…and he opened up a lot of doors for me”.

Davis became a headline act in Las Vegas, but 1950s Nevada was a “Jim Crowe” state, meaning that racial segregation was lawfully enforced. Davis and other black artists could entertain, but could not stay at the hotels where they performed, gamble in the casinos, or dine or drink in the hotel restaurants and bars. Eventually, Sammy refused to accept this treatment: upon arrival at the Fairmont, where he and his family were headlining, they were told there was no reservation for them. Davis suggested that they find a room if they wanted the show to go on, and sure enough a suite was made available. Later, Davis would use the same tactic to have his family enter the casinos and sit next to the stage as he performed, and ultimately refused to work at venues which upheld racial segregation.

It was around this time Davis’ interest in Judaism blossomed, as he read accounts of historical persecution, and admired the way in which the Jewish community fought for “their rights to have rights”.

In 1954, when driving from Vegas to LA that Sammy lost his eye, resulting in Cadillac altering the protruding “bullet”  horn in the centre of the steering wheel. Davis was afraid that the loss of momentum would damage his career, but a few months later when he returned to LA sporting an eye-patch, he was greeted to a rapturous reception by the biggest Hollywood stars of the day.

In 1959 Davis joined the Rat -Pack. The group made several movies together, including Ocean’s 11

(1964),  and performed many shows on stage together, both in Vegas and on tour.

In 1960 Davis married May Britt, a Swedish actress. interracial marriages were still forbidden by law in 31 US states out of 50, and Davis took flack from both white and black communities for “acting white”. Despite the seemingly never-ending criticism, Davis continued to push boundaries. In 1961 he converted to Judaism. Later, when playing golf Jack Benny asked him what his handicap was, to which Davis famously quipped “Talk about a handicap – I’m a one-eyed Negro Jew!”

In 1963 he participated in March on Washington, and made history in December  1967, when he greeted Nancy Sinatra with a kiss on NBC – one of the first interracial kisses on U.S. television. He often spoke passionately about his part in the civil rights movement: “My talent was the weapon, the power, the way for me to fight. It was the one way I might hope to affect a man’s thinking.”

Davis was a skilled and multi-talented performer, able to sing, act, play drums, trumpet, do impressions, and of course tap dance. Davis is recognised today as a master of the form and did much to keep tap in the popular conscience, performing in his own shows, such as Sammy and Company (1975) and Sammy Davis, Jr. the Golden Years (1980). His style was light and fast, working very close to the floor. He is revered for his musicality, his playful rhythms and ability to tease the beat. Davis was a natural showman, and developed a connection with his audiences which kept them coming back for more. In Tap Dancing America, A Cultural History

He was an inspiration and mentor to a great number of entertainers: In 1988 he starred in the movie Tap

with a then-young Savion Glover, and the late Gregory Hines. Hines, who revered Davis, paid homage to him in the television special Sammy Davis Jr. 60th Anniversary Show (1990), by performing a tap solo. He invited Davis onto the stage to dance and trade steps, but when Sammy gave a couple of relaxed three beat shuffles and a double heel click, Hines stopped dancing, knelt down and kissed Davis’ feet.

He was also an inspiration to a variety entertainer across the pond, Bruce Forsyth, who hosted Royal Variety Performance in which Davis performed in 1961, and 18 years later had him as a guest on The Bruce Forsyth Show. The pair performed a song and soft-shoe duet together, told jokes, and did impressions of each other. Davis said of Forsyth: “You do the best me in the world!”

Sadly during his later years, Davis developed issues with depression, spending, & addiction. He died in Beverly Hills, California from complications due to throat cancer – a result of his many years of smoking – and largely in debt. But his legacy remains as a passionate civil-rights activist and incredible entertainer: In 2001, he was posthumously awarded the Grammy Lifetime Achievement Award, & In 2017 he was inducted into the Rhythm & Blues Hall of Fame for being the “Greatest Entertainer in the World”.

He said on the Jack Eigan show: “I guess what it comes down to, Jack, is that I want to be looked at by the world not as a Negro, white, or polka dot, or put in a category with anybody. Good, bad, or indifferent, like me or hate me – but measure me by the sum total of what I am as an individual.”